My mother savored memories. Like leftovers from a Thanksgiving dinner, they were the kind of thing she chewed on for a week, rehashed, reimagined and reinvented as she found new things to reflect on.

A few years after my father died, I threw her a surprise birthday party at her house that was attended by several family members and friends. Mom was truly caught off guard and seemed pleased by the whole thing. Although I stayed behind to chat and to clean up after everyone went home, she still called me 15 minutes later (as I was walking through the front door of my own home) in order to thank me again, tell me how much she enjoyed herself and to relive the night all over again.

“So how did you know when the house would be empty?” She asked.

“Oh, right before you and your friend Jack went out for dinner, I had them ask to use the restroom so that they could call me from their cell phone,” I replied.

“He called you from the bathroom?”

“No mom, he dialed my number and let the phone ring once. That was the signal that you were leaving,” I replied.

She wanted to know how long it took me to plan it, where I bought the decorations, what bakery was responsible for the delicious cake, how many people I’d invited and who all was not able to attend.

“Why in the world would you want to know that?” I countered. “You had a houseful of people who love you and wanted to celebrate you. Why focus on the people who couldn’t make it?”

I later realized that wasn’t her point at all. For her, a surprise birthday party in September was the kind of thing that would tide her over until Halloween when she would count the number of Trick-or-Treaters she had, offer up a running commentary of how many looked “too old” to be out and lament the carloads of kids who were imported from nearby neighborhoods. Afterward she turned her attention toward Turkey Day, helping to organize my menu, tell me where the best deals were and double check the plans. After the meal was over, we’d go over everything again until I often felt as though we were having the same conversation on repeat.

As my world becomes more virtual, I’ve discovered that I also miss having long conversations with someone chewing over something that just happened. Today, I can’t even ask my friends went, about their vacation because I experienced it in real time via social media.

This month, let us be grateful for those memories that we make and experience in the here and now. Let us turn from the technology and be in the moment. Let us call the person after the fact and tell them how much we enjoyed the celebration they worked so hard to arrange rather than simply giving it a thumbs up on a web page.

Fabulous Fridays: Reasons I no longer shop on “Black Friday”

About 5 p.m. last night, my neighborhood came alive with sounds of cars coming through the main drive of the subdivision like an advancing army. Now, I was not out there doing a security check, but I suspect that most of them were not holiday guests leaving in order to make it home in time for the football game but eager shoppers looking to get the best bargains on a day known to everyone as “Black Friday.”

As you all know, I used to do it too. I was all about being at whatever location at some ungodly hour of the morning…but I don’t anymore and the evidence suggests to me that I might have given it up just in the nick of time. I vaguely remember actually stopping by Kmart on Thanksgiving about 13 years ago to check out some doorbuster deal, but they were the only retailer crazy enough to be open all day on Turkey Day. Now they all open in the afternoon and because people want to save some cash, they will be there. Good luck to you…but I will be at home. I’m taking a stand on this. No CEO needs my money that badly.

I have grown to have monumental problems with the whole Black Friday shopping thing so I decided to list some of my issues for a fun Fabulous Fridays post:

1. It’s no longer Black FRIDAY: I seriously question the education of the geniuses who have decided that Black Friday actually begins on a Thursday. This is not rocket science people. In fact, if you were raised correctly and learned the days of the week in Kindergarten, then you know that if there is a sale going on the day BEFORE Black Friday. It is a Thanksgiving Day sale. Why is this? Because it is happening on Thanksgiving. I understand the doors will be open long into Friday, but what kind of example are you setting here? You don’t have an “After Christmas sale” BEFORE Christmas, do you? If you are a 24-hour emporium such as Wal-Mart or Meijer, and your sale circular starts on Thursday, you don’t honor those prices on Wednesday, do you? No…I didn’t think so and don’t try to tell me that there is something different about this. Friday is the day that comes after Thursday…don’t make it more complicated than it is, people. You are doing nothing for future generations by screwing up the days of the week like this! 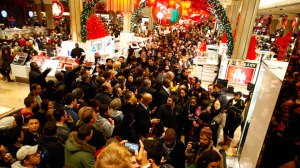 2. Black Friday is not a holiday: I’m not sure when Black Friday became it’s own “thing” but once upon a time the day after Thanksgiving was simply known as the “biggest retail day of the year.” That’s pretty tasteful in my opinion. But somehow, over time it grew ominous, it became “Black Friday” and loomed like an approaching storm on the horizon. It had such a weird and almost gloomy connotation that now we have to try and make it festive in hopes that no one will notice that it is encroaching on the rest of the week and has become something akin to Mardi Gras, summer vacation and other multi-day events. It’s a sale, people! Let’s not loose perspective, here.

3. It’s not worth it: Oh sure, you can pick up some good deals, you will make the people on your holiday list happy, but seriously? I can’t help thinking that the real object of Black Friday may be to be the last man standing with as much stuff in their trunks and have the most money left over. I know for a fact that there are people who treat it like a game or a sport and I find that a little disconcerting. We try and tell each other that its the gifts we can’t buy that matter, but on Black Friday people will go crazy trying to purchase happiness. I’m not convinced we are sending the right message to future generations. 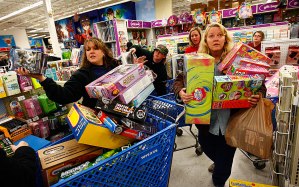 4. Service is no better on Black Friday: In fact, it’s usually worse though I will admit that stores seem to be a dab more organized than they are at any time of the year. I have been in stores where the associates have no idea what is on sale, who barely got any sleep the night before and whose nerves are frazzled trying to keep up with pushy and demanding shoppers in search of God only knows what that they think they can’t live without. Trust me, you can. If you have toilet paper and food in your home, you will get through the day just fine. No where is it written that you must have an LED HDTV (I have checked the Ten Commandments, the Constitution, the Magna Carte and my HOA rules just to make certain of that fact.)

5. It’s just not fair to the employees: Look, I get it. they have to work on this incredibly long weekend. That’s fine. But does it have to start on the Holiday itself? I have always felt sorry for movie theater employees who have to work on holidays but this is just ten times worse. The shear number of people who have to now work on Thanksgiving is insane. I can’t help missing the days when only the occasional grocery store was opened, we actually had a fair amount of time with our family and friends and CEOs knew how to put PEOPLE before the PROFITS and at least had the decency not to open their stores before 6 a.m. on Friday.

I can’t help wondering how long it will be before Thanksgiving is merely those few hours we spend fueling up for the shopping olympics and the meaning of the day is lost entirely. It’s slowly happening folks and while I can be tongue-in-cheek about it, I can’t ignore the facts. Black Friday is fine, but let’s not lose sight of what’s really important. Sales happen every week. Family, friends and memories are fleeting.

Until next time, Keep Rockin,