I have some concerns. 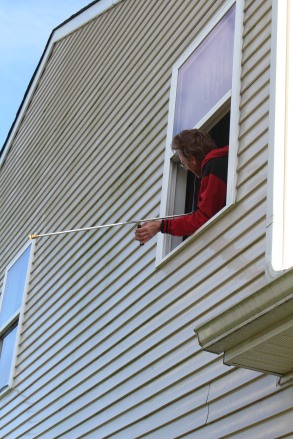 Two weeks ago, I noticed that the siding on my house needed cleaning. My esteemed counterpart and I made a pilgrimage to the hardware store to purchase a few bottles of “house wash” which could be attached to a garden hose. Sounds pretty simple, right? It’s a one-hour job…two at the max, provided you get right on it and don’t let anything distract you.

It is fourteen days later and I am watching as the nozzle of a rented, pressure washer is being hoisted to an open second story window by way of a 50-foot wet extension cord. Does anyone else see a problem here?

It was bad enough that the job had to be postponed the first week due to rain, but it was further delayed by Johnny-On-The-Spot’s procrastination skills. Not only did he have to watch a few Saturday morning cartoons and catch up on his online video games, but then he felt compelled to take his mother out to lunch and waste 30 minutes playing me snippets of the Beatles’ greatest hits.

“Look, I love you but seriously… either play all of ‘Hey Jude’ or none of it. Don’t jump tracks midway through. It’s hard on my ears,” I told him.

“I’m just killing time waiting for you,” he replied. “I need your help.”

Of course he can’t. He only managed to turn the entire side yard into a swamp, rent a power washer and rig a dangerous system for reaching the top of the house that will result in either his electrocution or the flooding of my bedroom. Yet he hadn’t actually done anything. I firmly believe I am present solely to bear witness to the forthcoming tragedy and have an appropriate statement for when the EMTs or insurance adjuster arrives.

Over the next several minutes, I took several pictures in order to point out certain problem areas and then left him to it. An hour later, my colleague came inside and turned on the TV. He announced that the job was finished and he had returned the equipment. However, I remained suspicious.

“So all four sides of the house have been cleaned?” I asked.

He seemed genuinely surprised by the question. “Well no, I only thought one side was dirty.”

The moral of this story is that if you want something done right, do it yourself. It will be less dangerous. The job will be completed in full and your relationship will be a lot stronger for it.