This week’s list asks us to jot down the ways in which we can rejuvenate our space. 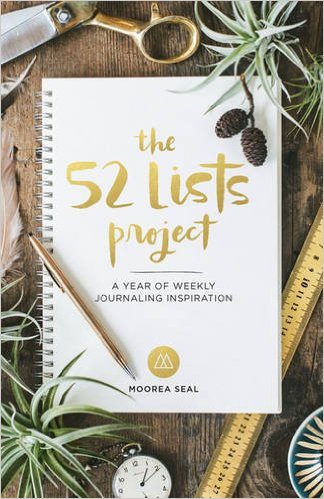 Tip of the week: Pick one thing you can do this week and notice how your space and your mood changes!) Be sure to let me know what you did!

February Column for Michiana House & Home: “Eyes” on the prize

As you may recall from a previous column, when it came to art, my parents’ taste was all in their mouths. Their idea of modern expressionism was hanging a tree branch on the wall and calling it a day. The landscape behind the sofa was a puzzle that they glued to a sheet of cardboard and framed using wood from dad’s scrap pile in the garage. They were fans of the Polaroid, not Picasso and the only masters we owned were an unfinished Van Gogh paint-by-numbers kit and a Campbell’s Soup can. Not the Warhol original or print, mind you, but an actual can of soup in the cabinet. So you can imagine how shocked I was a few months ago to discover that my folks, unbeknownst to me may have actually owned a piece of pop art history. I’m telling you, it’s the kind of thing that Hollywood makes movies about.

Actually, that’s how it all started. I was at the movies watching the trailer for Big Eyes starring Amy Adams as 60’s artist Margaret Keane. As Keane’s paintings flashed across the screen, there was something oddly familiar about them. I stared at the desolate waifs with the huge, saucer-like eyes and knew that I had seen them somewhere before. I racked my brain for the rest of the day trying to remember where and I kept picturing the finished basement of my childhood where just above the sink in the kitchen area, I recalled two prints that used to hang there. My mother’s sister-in-law gave them to us and they featured the same kids: poor, sad-looking and sporting those same big eyes.

Now, in full disclosure, I must admit that those pictures creeped me out when I was little and I was not a bit sad when my mother replaced them with a mirror several years later, but the thought that my parents may have actually owned Keane kitsch at one time was a thrilling prospect. (I knew better than to think that we may have had originals…come on, this is my parents we’re talking about!) 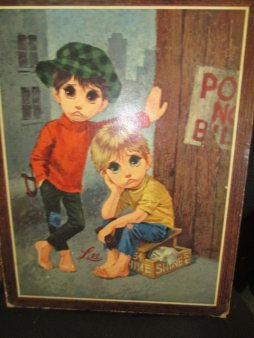 As I began researching Keane’s work though, something seemed off. The pictures I recalled from my basement were similar, but not the same. Keane’s waifs were haunting while my mom’s were simply sad. The colors weren’t right. The clothing was different, but there was no mistaking those huge, sad eyes. I discovered that Keane’s success spawned a number of knock-off artists who painted the same kind of big-eyed child at a fraction of the cost. These prints, tchotchkes and household items saturated the market faster than you can say Thomas Kincaid and I eventually learned that one of them, someone named Lee (not much is known about this particular artist) was the creator of the prints that were on display in my childhood home.

Although I was disappointed to learn that my parents did not own a piece of Keane memorabilia, I was tickled to learn that they were connected to actual art movement, even if they never knew it existed. For them, that was a big accomplishment and everyone knows that a print of a knock-off is still a priceless piece of art.

It’s not worth anything except the $20 you’ll pay for it on eBay.