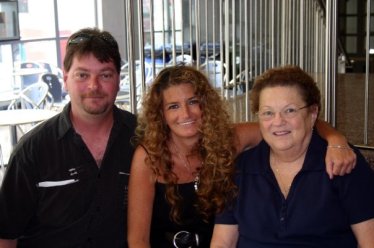 The earliest memory I have of my Aunt Sandy is set against the backdrop of a Fourth of July family cookout we had at her Irvington home. I was very young, between four and five at the most, but I distinctly remember the event. As my brother and I played Frisbee in the backyard, my aunt burst out of the back yard, clapped her hands together and asked, “Can we get a three-handed game going here?”

This amazed me for two reasons. 1.) It was the first time I remember an adult actually wanting to play with me, and 2.) I was unaware that my aunt even knew how to toss a Frisbee!

Eventually I would learn that my Aunt Sandy, who was as colorful as a firework knew how to do a lot more than that. She had an independent spirit and over the years, she taught me how to crochet, cross-stitch, make a meat loaf and a sure fire way for keeping rabbits out of my garden. She was a glass-half-full type who always found something to compliment whenever she stopped by for a visit, she told the best stories and although she was a very active adult, she always knew how to be in the moment.

Although she was not the kind of person for idle chitchat, whenever I called her, she always made a little bit of time for me. More often than not, I was calling to read her a draft of one of my columns for MHH. Whenever I wrote about my mom, dad or grandparents, especially if it were an over-embellished re-telling of a factual event, I worried that I might go too far and I wanted her to sign off on it, so to speak.

As soon as I began reading the copy, she’d start laughing. She had a great laugh. It was deep, throaty and genuine and I knew if she laughed, I must have hit a home run. She was my biggest fan and these columns would not be the same without her.

Not long ago, I received a call from my cousin telling me that my aunt had passed. Evidently she’d been ill for most of the year, but didn’t want anyone to worry about her. I saw her for the last time at my house in February. She walked into the living room, praised my housekeeping skills, laughed at my cookbook collection (even though I don’t cook) and asked if I was working on a new column.

She certainly did and as part of her final arrangements, she requested that I deliver her eulogy. It was a command performance that I couldn’t refuse and yet, it was one of the hardest things I’ve ever had to do. The words were easy, of course it’s always easy to talk about someone you love…the hard part is realizing they are no longer there to bounce things off of or tell you when you got it right.