Confessions of a Cynical Catholic: How cool is that?

(This is a reblog from one of my 2016 posts at http://www.Acatholicmoment.com) 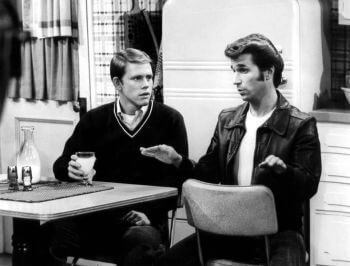 When I was a kid, I was a huge fan of the ABC hit television series Happy Days and like many viewers; I couldn’t get enough of Arthur Fonzarelli (a.k.a. “The Fonz.”) In the event you have never heard of this individual, the Fonz (played by Henry Winkler) was a tough-talking, 1950’s era, bad boy greaser with a heart of gold who lived in a small apartment above the Cunningham’s garage and served as an adopted son, older brother, idol, mentor and pal to the rest of the show’s ensemble.

Those who are familiar with the series know there was nothing that Fonz couldn’t do. He was the coolest of the cool. He could always be counted upon to show up in a pinch, take on any challenge and defeat any foe whether it was a rival gang, a power hungry police officer, or even an alien named Mork. He was both revered and feared by his friends who were intimidated and inspired by his special brand of magic no one fully understood. He could turn off the lights or cause the jukebox to play with a bump of his fist. He could make the phone ring or the girls to flock by his side with a mere snap of his fingers and over the course of 11 seasons performed any number of stunts no normal person in their right mind would attempt.

One of my favorites occurred during an episode in which the Fonz joins Richie and the gang on a campout in the woods. While attempting to sleep under the stars like a cowboy, he becomes annoyed by the numerous nighttime noises, rises from his place by the fire and shouts, “Cool it!” into the darkness. The animals naturally cease on his command and when he is satisfied by the outcome, the Fonz straightens his jacket, folds his arms and lays back saying, “Let’s see Tarzan do that!”

Whenever I see a rerun of this episode, I am reminded of today’s gospel in which Jesus calms the sea. Though it may be sacrilegious to compare the Son of God to a beloved television icon, I can’t help seeing the similarities. Though He didn’t wear a leather jacket or ride a motorcycle, I get the impression that Jesus’ presence commanded attention wherever He went. He was the coolest of the cool. His friends counted on Him to come through in clutch situations, did not understand the special power He clearly possessed and seem both awed and afraid of Him at the same time.

What I find most interesting is how those around these two individuals react to their God-given abilities. No matter how many times they ride in like the cavalry or save the day in the nick of time, their friends them genuinely seem surprised when it happens. It is as though they lack faith in someone who has proven time and time again how capable he is and more than ready to stand up to the challenge.

Unfortunately we also lack that faith in ourselves. Both the Fonz and Jesus stress to their friends the need to have faith in themselves when problems arise because one day, they won’t be around to fight their battles for them. Though we may not be able to control nature or command the sea, when we look inside our own hearts we must seek to find that little bit of Jesus or the Fonz that lives inside of us; the part that has the faith in our ability to weather any storm, stand up to any test, remain cool under pressure and use the gifts God has given us. It’s only then will we accomplish more than we ever dream possible.

I think even the Fonz would have to give that idea two thumbs way up.